Even if you have no knowledge of Latin, you can help bring these forgotten texts back to life with a pull request.

What's this all about?

In short, there's a lot of weird, cool Latin out there, and we should read more of it.

On account of projects like Google Books and the Internet Archive, there are literally tens of thousands of new Latin texts available on the Internet. Many well-known texts from antiquity are available at The Perseus Project, and even some medieval and early modern texts are available at The Latin Library, but there is still an enormous amount of Latin literature that is available only as scanned images, not as plaintext. To get an idea of the amount of material out there, take a look at the collection of Latin language texts available at HathiTrust.

GitClassics aims to make some of these obscure Latin texts more readily available by editing, translating, and publishing them on GitHub.

Can't OCR do this for us?

Probably not as well as a bunch of human readers. And part of the fun is becoming more familiar with the vast literature of the Latin language by working closely with texts.

GitClassics also aims to build a community of translators, not just readers, who can work together to write modern-language editions of these old texts. OCR can't translate for us, and Google Translate doesn't do the trick for Latin.

Sounds neat! Which text are you starting with?

We're starting GitClassics with an 1530 poem called Pugna Porcorum ("The Battle of the Pigs"). It's one of the strangest Latin texts I know of. Check out this frontispiece: there are pigs with guns. 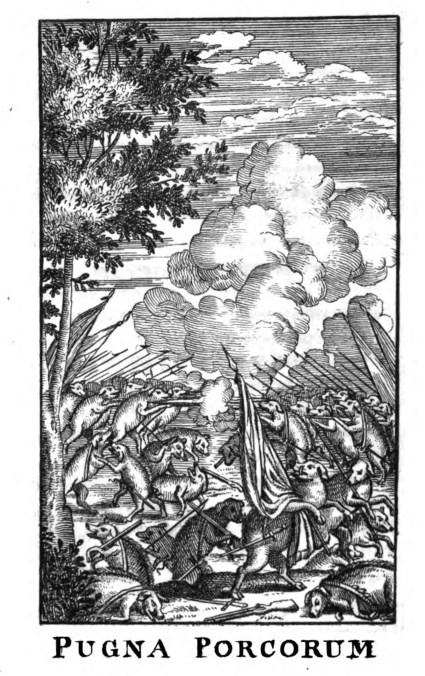 It's hundreds of lines long and written in dactylic hexameter, and every word begins with the letter 'p' (including words in the footnotes). It's an absurd but virtuosic piece of literature, almost like a Latin Animal Farm but by Lewis Carroll. 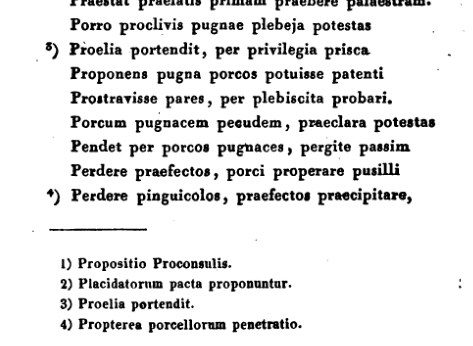 I don't know Latin! Can I still help?

Sure! You can help create plaintext editions of these texts simply by transcribing what you read in a scanned image. No knowledge of Latin required.

Great, how to I start!

Fork the PugnaPorcorum repository, transcribe some of the Latin from the PDF into one of the text files, and submit a pull request. There are more detailed instructions on the repository's website. Once we've finished transcribing the Latin, we can start working on an English translation. (Of course, people are welcome to work on translations into other languages, too!)

If you're a classicist who is new to GitHub, you might want to head to GitHub Guides to learn about how you can use GitHub to contribute to GitClassics.

Who is in charge of GitClassics?

My name is Charles McNamara, and I'm a Ph.D. candidate in Classics at Columbia. I hope GitClassics creates opportunities for hobbyists and professionals alike to work on neat projects that explore the long, fascinating history of Latin.